The long, rich history of Pennsylvania Standardbred breeding is unmatched by any other state. Read more in this article by Russell C. Williams,
President & CEO of Hanover Shoe Farms.

A Native Pennsylvania Industry with Deep Roots in History 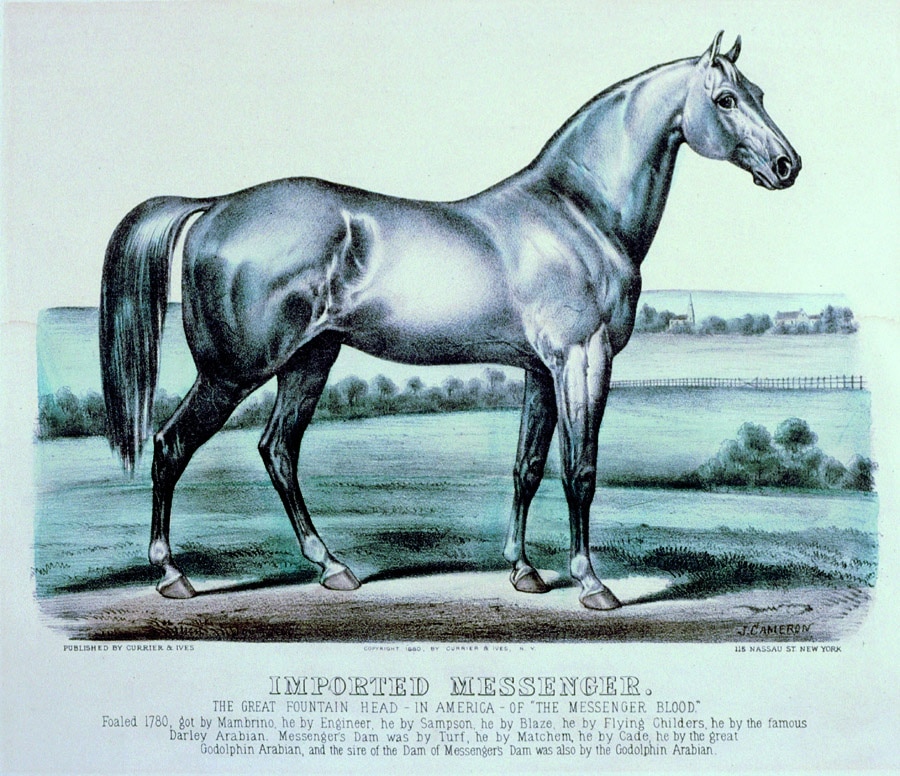 From the time of William Penn until 1750 there was a circular racetrack laid out on the public common near Race Street in Philadelphia. Running, trotting, and pacing races all were popular attractions there. A race fan from those days was quoted as saying, “These Race Street races were mostly pace-races.” His father, it was also reported, and many others in southeastern Pennsylvania kept pacing stallions for propagating the breed. Pennsylvania established itself early as one of the principal centers of all types of horse racing and breeding in the colonial period.

In 1797 Philadelphia was the port of entry for the English Thoroughbred Messenger. Imported Messenger was a successful sire of runners, but he also sired many individuals that wanted to trot instead.

Indeed, by 1820 Messenger’s descendants were attracting serious attention from New York to Philadelphia and beyond for their trotting ability. Through his descendant Hambletonian, Messenger became the genetic tap root for all Standardbreds today. Pennsylvania, in this sense, was the gateway to one of the world’s preeminent equine racing breeds. 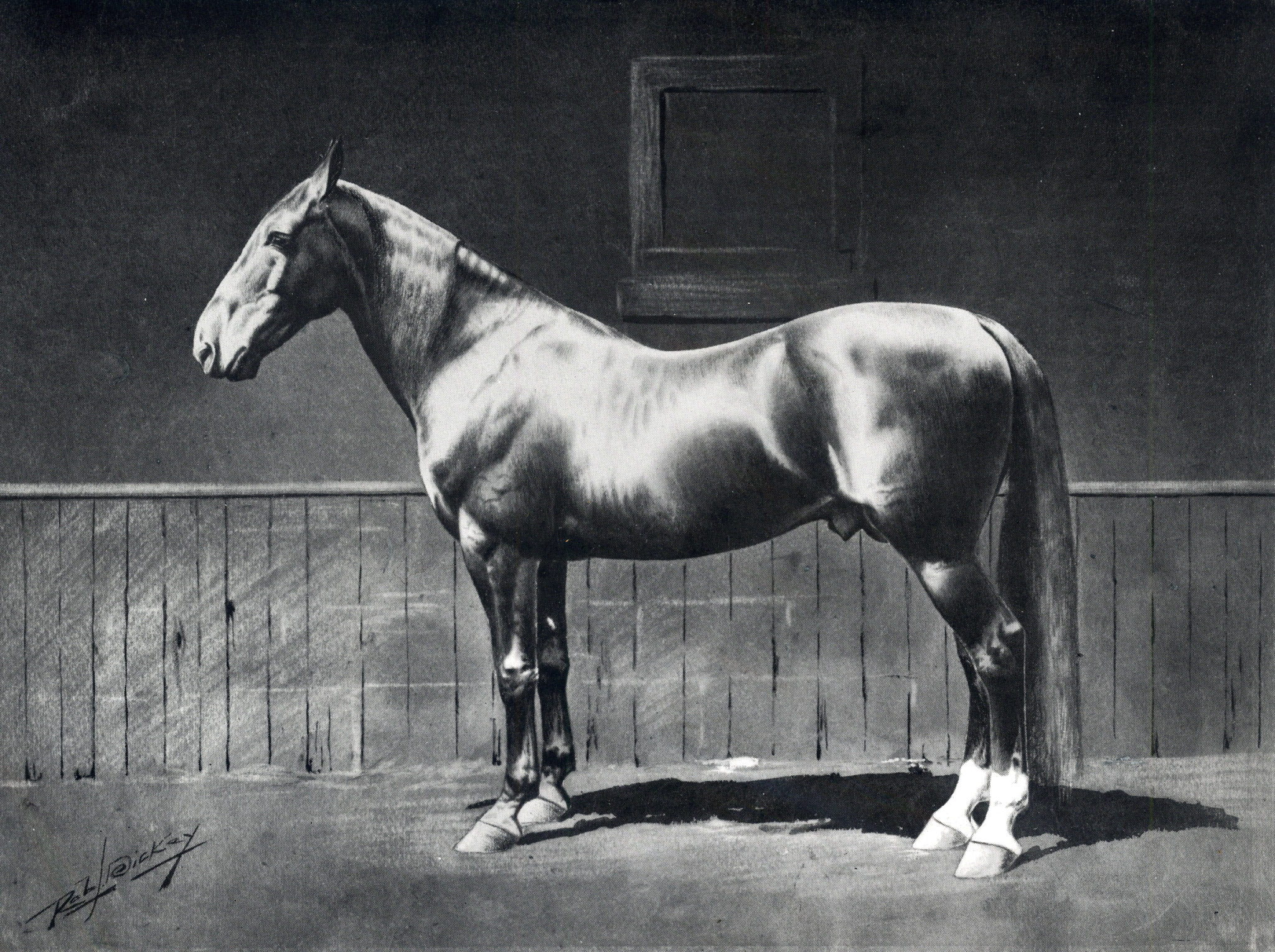 On Saturday, September 25, 1810, an unnamed chestnut horse trotted in a sulky one mile in two minutes, forty-eight and one-half seconds, lowering a New York time record that had stood for four years and putting Pennsylvania prominently on the national sporting map. This event took place at Allen’s Racecourse (soon to become Hunting Park) in northern Philadelphia, and the prize for the record-setting performance was $600, equivalent to $12,000 today.

Over two hundred years ago, Pennsylvania’s Hunting Park was the first full-mile track in the United States built for trotting purposes and the source of sporting news of interest to the entire nation.

A group of Pennsylvanians met at the Indian Queen Tavern on South 4th Street in Philadelphia on February 8, 1828 and agreed on the following organizational purpose:

For the encouragement of the breed of fine horses, especially that most valuable one known as the trotter, whose extraordinary powers cannot be developed or properly estimated without trials of speed and bottom, and in order to prevent those vicious practices which often occur on the course, where it is not subject to the government and direction of an Association, empowered and resolved to maintain good order – the subscribers agree to associate under the name and title of the Hunting Park Association.

Thus was formed one of the first racing regulatory bodies in the United States.

Around this same time, the celebrated racehorse Topgallant stood at or near the top of the trotting lists, and Hunting Park was his home track. Among racing enthusiasts, he became one of the greatest stars that ever blazed across the American turf, known far and wide as “Old Top.” 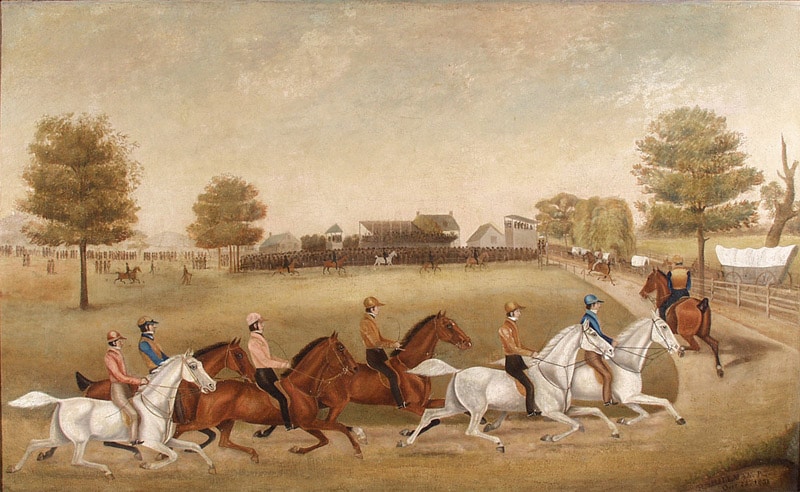 “FIRST PAINTING OF A TROTTING RACE”

Hunting Park remained one of America’s best-known racecourses throughout the first half of the nineteenth century. It became one of Philadelphia’s city parks in 1855 and, though the track itself is long gone, the space it occupied remains a pleasant urban green space of 87 acres. Perhaps, in memory and imagination, Old Top’s hoof beats can still be heard there today.

Grand Bashaw, another imported Thoroughbred, stood at stud in the Philadelphia area beginning in 1821. In 1822 he sired Young Bashaw, which turned out to be a slashing natural trotter. In 1828 Young Bashaw produced a son, foaled near Philadelphia and named Andrew Jackson. After an illustrious racing career, including several world records taken at Hunting Park, Andrew Jackson entered the stud at Knightstown, Pennsylvania. By the time of his death, Pennsylvania’s own Andrew Jackson had become the first nationally famous trotting stallion in the American breeding industry.

The twentieth and early twenty-first centuries fully established Pennsylvania as one of the preeminent centers of horse racing and breeding on the North American continent, but the modern history of our thriving horse industry is already well known, or should be. The purpose of this note is simply to show the horse industry’s deep roots in our Commonwealth, which go deeper than most other industries here today, and to shine some light on early historical facts about Pennsylvania that even our elected officials in Harrisburg might not know. World-class breeding farms, world-class tracks, and countless race meetings at tracks and county fairs across the Commonwealth during more than three centuries have made Pennsylvania famous down to the present day as a showpiece of American horse racing and breeding.